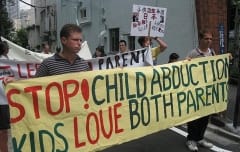 
TOKYO — Timing their message to coincide with Vice President Joe Biden’s visit to Japan, a small but vocal group of activists marched in the streets Tuesday, urging Japan to sign an international treaty on parental child abduction.

Most of the two dozen marchers were American and other foreign fathers who have been cut off from their half-Japanese children by mothers who refuse to share custody and are shielded from doing so by current Japanese law.

The group said the U.S. should urge Japan to follow through on its recent promise to sign the 1980 Hague Convention on Aspects of International Child Abduction — which would help prevent such custody problems from arising. The group also wants Japan to develop an interim plan to restore parental rights to hundreds of foreigners whose children have been spirited away in Japan.

“We would like Vice President Biden to address the issue publicly while he’s in Japan,” said American Tony Del Vecchio, a university professor in Tokyo who hasn’t seen his 13-year-old daughter in seven years.

The protest was held near the site of Biden's meeting Tuesday with Japanese Prime Minister Naoto Kan. It was unclear whether the vice president saw the demonstrators or was aware of the protest.

The Hague treaty requires that a child be returned to his or her habitual residence should one parent flee to another country with that child to evade a custody dispute or dodge an existing court order. There are currently 173 American-Japanese children who have been abducted by a parent in Japan, according to U.S. State Department records.

But Japan has said it will not apply the treaty retroactively to existing parental child abduction cases, leaving parents like Del Vecchio with little hope.

Japan announced in May it would sign the Hague treaty, following decades of diplomatic requests from the U.S. and international community. The media, advocacy groups and even the U.S. Congress have added to the pressure in recent years.

AdvertisementMost outsiders viewed Japan’s acquiescence as a positive step for the country, where the tradition of sole-custody divorces prevails and courtsvirtually never grant custody to foreigners, especially men.

“I have no rights here,” said Tim Johnston, a California native who has lived in Japan for 14 years and has been unable to see his 7-year-old son for three months.

Carrying a sign that read “Why don’t we have rights to see our children in Japan?” below a photograph of his son, Johnston was among the activists who marched Tuesday in central Tokyo.

It could take years before Japan signs the treaty because some domestic laws will need to be changed before implementation, Japanese officials have said. Some Japanese lawmakers are working on laws that would allow exemptions to the treaty in cases of domestic abuse, which Western officials are quick to point out already exist within the Hague.

U.S. officials and the left-behind parents have expressed concern that Japan — which for years has been reluctant to accede to the Hague treaty because of its divorce customs — may be trying to circumvent the process with that argument.

“We will not rest until we see the kinds of changes that are necessary and we will certainly not abide by loopholes or other steps that will, frankly, somehow negate or water down” the agreement, Kurt Campbell, assistant secretary of state for East Asia, said in July, according to the Agence France-Presse news agency.

Rep. Chris Smith, R-N.J., proposed legislation last month that would impose economic sanctions against Japan and other countries that demonstrate a “pattern of non-cooperation” in resolving child abduction cases. Smith tried to pass a similar law in 2010 but it died in the House, and it’s unclear whether the bill has any new support this year.

Del Vecchio, the professor, supports Smith’s efforts and said congressional action could become vital should Japan continue to waver on the issue.

“The question is, will Japan sign (the Hague treaty) in the right spirit?”

Two Canadian men, who asked not to be identified, hold a sign during a demonstration in Tokyo on Tuesday advocating dual custody rights for divorced parents in Japan. The man on the right said he wished to remain anonymous for fear his participation would anger his Japanese ex-wife and further complicate his custody battle.
Charlie Reed/Stars and Stripes