Phosphor spray gun it is possible to spray small size

This is a spray gun that circulates around the liquid that contains phosphor and is sprayed. It was called Micro Spray Gun, and this gun uniformly distributed the material and to spray it by the small diameter size, was developed.
The micro spray gun can dispense small amount of material from 0.2g/min.
The gun can be mounted to precision 3-axis (X,Y, and Z) robots to make excellent thin films. Film thickness can easily be adjusted between 0.1 µm and 20 µm. The 2mmφ diameter size dot can be coated. Also, using gun movers, substrates such as large glasses, or substrates width up to 1m can be coated.
Coating material supplying methods can be selected based on the characteristics of the material actually used. The gun ON/OFF mechanism is engineered so that coating material does not adhere onto the tip of the gun nozzle.
Picture．Micro Spray Gun without circulation system

The leaf form nozzle which can be diffused
When a leaf form nozzle carries out high-speed amplitude by itself, a wide range spray pattern is obtained. patent pending.
The leaf form nozzle was improved the nozzle for washing, for water application and liquid coating nozzles. The feature of a leaf form nozzle is making it breathe out in high-speed self-oscillating operation of per 10ms or more cycles.
It became possible to carry out self-amplitude of the flow of particle jet of the spraying fluid atomized in compressed air with a leaf form nozzle in the fixed direction. Water ,the liquid for a functional coating ,and the flow of particle jet of a paint were used, and it became possible to carry out amplitude injection at the subject. Liquid viscosity is possible in the range of 5 to 800 cps.The prevention effect of rebound is acquired by the subject and the extensive improvement of the coating efficiency is carried out by the discharge of high-speed self-oscillating operation of a leaf nozzle.
URL:http://shimadaappli.com/ 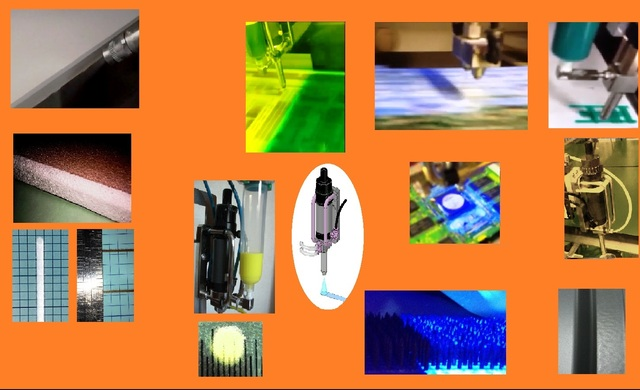