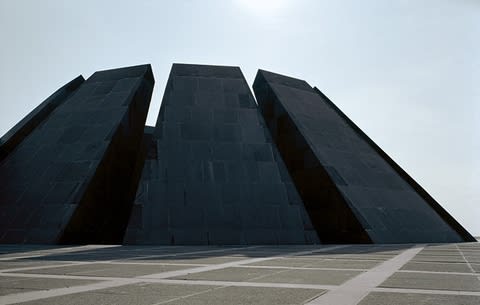 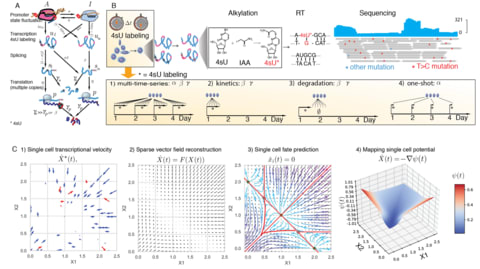 Dynamo builds a cell-wise transition matrix by translating the velocity vector direction and the spatial relationship of each cell to transition probabilities. Dynamo uses a few different kernels to build a transition matrix which can then be used to run Markov chain simulations. 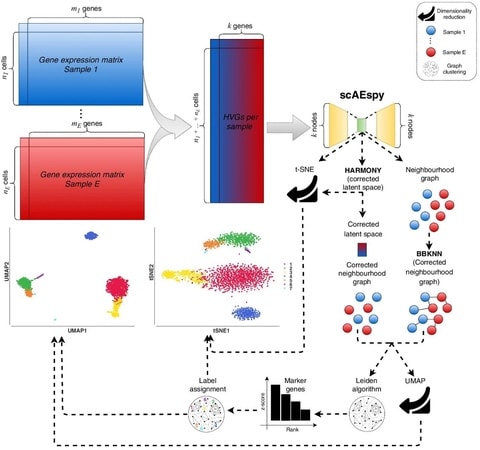 scAEspy is used to reduce the HVG space (k dimensions), and the obtained latent space can be used to calculate a t-SNE space. The corrected latent space by Harmony is then used to build a neighbourhood graph, which is clustered by using the Leiden algorithm. 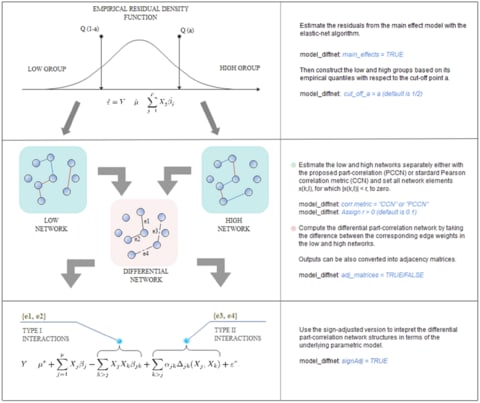 A novel dependency metric is provided to account for certain collinearities in data that are considered problematic w/ the parametric methods. The underlying parametric model is used again to provide a parametric interpretation for the estimated co-expression network elements.

The algorithm first estimates the gene expression covariance matrix for each cell type and then leverages the spatial locations of cells to construct cell-specific networks.

The second step uses expression covariance matrices estimated in step one and label information from neighboring cells as an empirical prior to obtain thresholded Bayesian posterior estimates.

Identifying single nucleotide variants has become common practice for dscRNA-seq; however, a pipeline does not exist to maximize variant calling accuracy. Molecular duplicates generated in these experiments have not been utilized to optimally detect variant co-expression.

scSNV is designed from the ground up to “collapse” molecular duplicates and accurately identify variants and their co-expression. scSNV has fewer false-positive SNV calls than Cell Ranger and STARsolo when using pseudo-bulk samples. 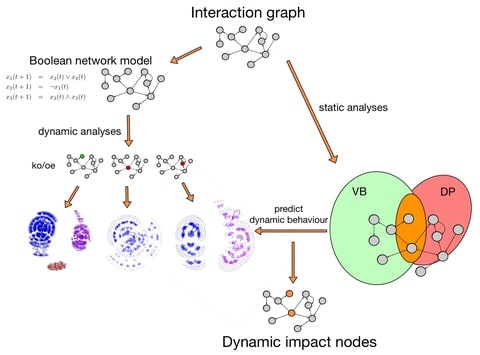 The existence of paths from gatekeeper nodes to hubs having a higher maximal mutual information than other classes further demonstrates that this principle extends to longer paths, that is there exist channels of information flow which are more stable carriers of signals. 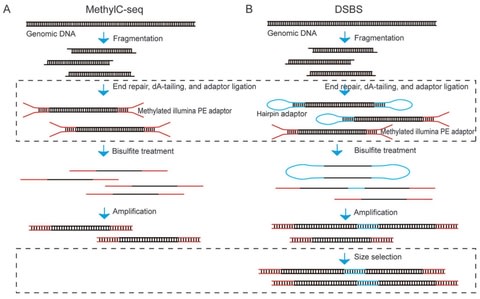 DSBS analyzer is a pipeline to analyzing Double Strand Bisulfite Sequencing data, which could simultaneously identify SNVs and evaluate DNA methylation levels in a single base resolution. 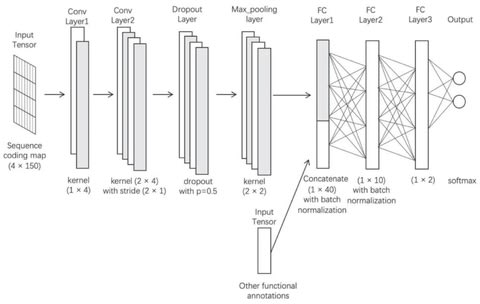 The semi-supervised deep learning model coupled with pseudo labeling has advantages in studying with limited datasets, which is not unusual in biology. This study provides an effective approach in finding non-coding mutations potentially associated with various biological phenomena.

This model included three fully-connected (FC) layers, which are also known as dense layers. The input to the first FC layer is generated by concatenating the output of the max pooling function with the additional feature map of the epigenetic and nucleotide composition features. 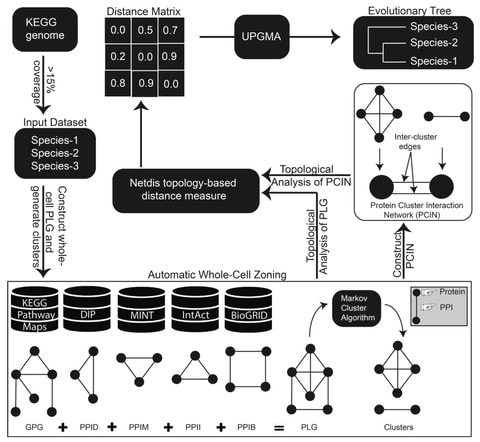 SSG-LUGIA leverages the atypical compositional biases of the alien genes to localize GIs in prokaryotic genomes. The anomalous segments thus identified are further refined following a post-processing step, and finally, the proximal segments are merged to produce the list of GIs.

TreeVAE uses a variational autoencoder (VAE) to model the observed transcriptomic data while accounting for the phylogenetic relationships between cells.

TreeVAE couples a complex non-linear observation model with a more simple correlation model in latent space (any marginal distribution for the GRW is tractable). TreeVAE could be improved by exploiting just-in-time compilation(e.g. JAX), to speed-up the message passing algorithm.

Formulating the learning of similarity-preserving hash codes in terms of orthogonally rotating the semantic data, so as to minimize the quantization loss of mapping data to hamming space and propose a fast discriminative discrete hashing for large-scale cross-modal retrieval.

FDDH introduces an orthogonal basis to regress the targeted hash codes of training examples to their corresponding semantic labels and utilizes the ϵ-dragging technique to provide provable large semantic margins.

FDDH theoretically approximates the bi-Lipschitz continuity. An orthogonal transformation scheme is further proposed to map the nonlinear embedding data into the semantic subspace. The discriminative power of semantic information can be explicitly captured and maximized. 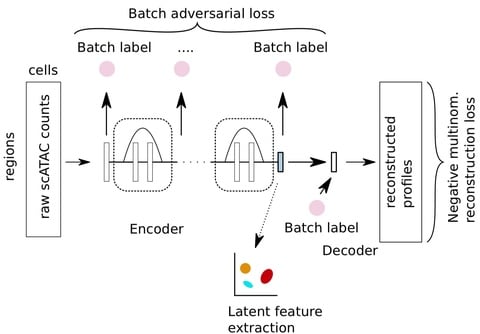 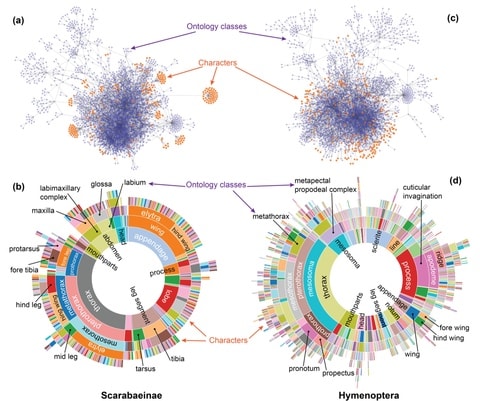 □ ontoFAST: An R package for interactive and semi-automatic annotation of characters with biological ontologies

The commonly used Entity-Quality (EQ) syntax provides rich semantics and high granularity for annotating phenotypes and characters using ontologies. However, EQ syntax might be time inefficient if this granularity is unnecessary for downstream analysis.

Horizontal integration describes the problem of merging two or more datasets expressed in a common feature space, each of those containing samples gathered across distinct sources or experiments.

a variant of the optimal transport (OT)- and Gromov-Wasserstein (GW)- based dataset integration algorithm introduced in SCOT.

Formulating a constrained quadratic program to adjust sample weights before OT or GW so that weighted point density is close to be uniform over the point cloud, for a given kernel.

An Extended Biodepot-workflow-builder (Bwb) to provide a modular and easy-to-use graphical interface that allows users to create, customize, execute, and monitor bioinformatics workflows.

And observed a 34x speedup and a 109x reduction in costs for the rate-limiting basecalling step in the cell line data. The graphical interface and greatly simplified deployment facilitate the adoption of GPUs for rapid, cost-effective analysis of long-read sequencing.

Bathometer aims for an index that is compact and can be used without having to be read into memory completely. An index stores for each strand of each reference sequence the list of starting positions and the list of end positions of all reads. 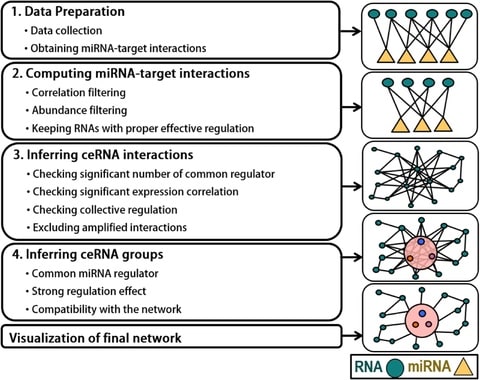 FAME can reduce the potential for bias, and produce more timely, thorough and reliable systematic reviews of aggregate data.

The FAME estimates of absolute information size and power, and the associated decision on meta-analysis timing should be included. FAME is suited to situations where quick and robust answers are needed, but prospective IPD meta-analysis would be too protracted.

POEMColoc does not discard information when full summary statistics are available for one but not both of the traits and does not assume that both traits have a causal variant in the region.

With Swarm, large genomic datasets hosted on different cloud platforms or on-premise systems can be jointly analyzed with reduced data motion. Swarm can in principle facilitate federated learning by transferring models across clouds.

Swarm can help transfer intermediate results of the machine learning models across the cloud, so that the model can continue to learn and improve using the new data in the second cloud. For instance, gradients of deep learning models can be transferred by Swarm.

it exhibits real gene clusters and ontologies both at local and global scales, suggesting that the model learns to approximate the gene expression manifold in a biologically meaningful way.

XGBOOST is an algorithm combining GNN and XGBOOST, which can introduce the machine learning algorithm XGBOOST under the existing GNN network architecture to improve the algorithm capability.The GNN used in this paper includes DMPNN, GGNN and GCN.


□ Caution against examining the role of reverse causality in Mendelian Randomization

the MR Steiger approach may fail to correctly identify the direction of causality. This is true, especially in the presence of pleiotropy.

reverseDirection which runs simulations for user-specified scenarios to examine when the MR Steiger approach can correctly determine the causal direction between two phenotypes in any user specified scenario.

the GMM-based tests perform better in terms of power and small sample performance compared with traditional tests in the partially linear setting, with drastic improvement under model misspecification.

Within the hybrid methodologies, there are two main approaches: alignment of short reads to long reads using a variety of aligners to achieve maximum accuracy (e.g., HECIL); or to perform firstly an assembly with short reads and then to align against it the long reads to correct them (e.g., HALC).

Superscan aims to reach high overall performance across a range of datasets by including a large collection of training data. This is in contrast to a method like CaSTLE, which also employs an XGBoost model but requires specification of a sufficiently similar pre-labeled dataset. 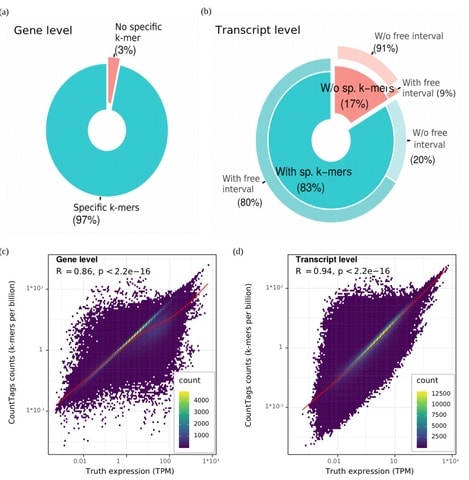 The core tool, Kmerator, produces specific k-mers for 97% of human genes, enabling the measure of gene expression with high accuracy in simulated datasets.

ccdf tests the association of each gene expression with one or many variables of interest (that can be either continuous or discrete), while potentially adjusting for additional covariates.

EM-MUL not only rescues multireads overlapped with unique reads, but also uses the overall coverage and accurate base-level alignment to resolve multireads that cannot be handled by current methods.

Vulcan runs up to 4X faster than NGMLR alone and produces lower edit distance alignments than minimap2, on both simulated and real datasets. Vulcan could be used for any combination of long-read mappers that output the edit distance (NM tag) directly within sam/bam file output.

The findere implementation proposed here uses a Bloom filter as AMQ. It proposes a way to index and query Kmers from biological sequences (fastq or fasta, gzipped or not, possibly considering only canonical Kmers) or from any textual data.

LazyB starts from a bipartite overlap graph between long reads and restrictively filtered short-read unitigs. This graph is translated into a long-read overlap graph G.

Instead of the more conventional approach of removing tips, bubbles, and other local features, LazyB stepwisely extracts subgraphs whose global properties approach a disjoint union of paths. 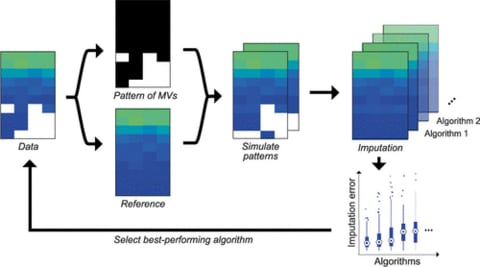 DIMA can take a numeric matrix or the file path to a MaxQuant ProteinGroups file as an input. The data is reduced to the columns which include pattern in their sample names.

DIMA reliably suggests a high-performing imputation algorithm, which is always among the three best algorithms and results in a root mean square error difference (ΔRMSE) ≤ 10% in 80% of the cases.

Random Walk with Restart (RWR) and Heat Diffusion has revealed specific characteristics of the algorithms. Optimal parameters could also be obtained by either maximizing the agreement between different omics layers or by maximizing the consistency between biological replicates.