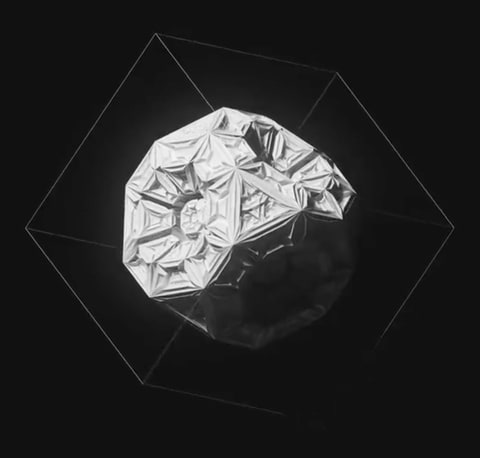 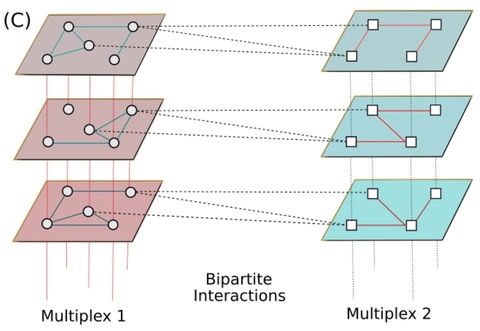 MultiVERSE, an extension of the VERSE framework using Random Walks with Restart on Multiplex (RWR-M) and Multiplex-Heterogeneous (RWR-MH) networks. MultiVERSE is a fast and scalable method to learn node embeddings from multiplex and multiplex-heterogeneous networks.

Spherical K-means clustering is well-adapted to high-dimensional clustering. MultiVERSE effectively captures node properties and a better representation of the topological structure of the multiplex network as RWR-M applies a random walk in pseudo-infinite time. 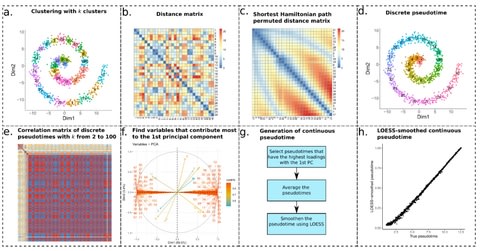 scShaper is able to infer accurate trajectories for a variety of nonlinear mathematical trajectories, including many for which the commonly used principal curves method fails.

scShaper smooths the ensemble pseudotime using local regression (LOESS). The clustering is performed using the k-means algorithm, and the result is permuted using a special case of Kruskal's algorithm.

scShaper is based on graph theory and solves the shortest Hamiltonian path of a clustering, utilizing a greedy algorithm to permute clusterings computed using the k-means method to obtain a set of discrete pseudotimes.

PseudotimeDE uses subsampling to estimate pseudotime inference uncertainty and propagates the uncertainty to its statistical test for DE gene identification.

PseudotimeDE fits NB-GAM or zero-inflated negative binomial GAM to every gene in the dataset to obtain a test statistic that indicates the effect size of the inferred pseudotime on the GE. Pseudotime fits a Gamma distribution or a mixture of two Gamma distributions. 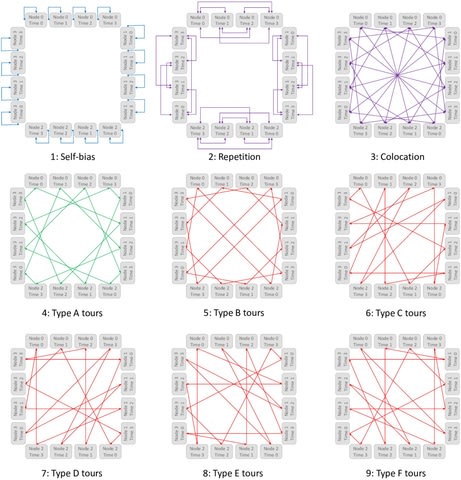 Each one of the four steps of the implementation (TSP, QUBO, Hamiltonians and QAOA) is explained with a proof-of-concept example to target both the genomics research community and quantum application developers in a self-contained manner.

This is the target algorithm for which the quantum kernel is formulated. The implementation and results on executing the algorithm from a set of DNA reads to a reconstructed sequence, on a gate-based quantum simulator, the D-Wave quantum annealing simulator. 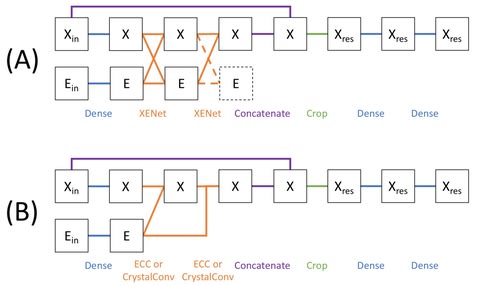 XENet is a message-passing GNN that simultaneously accounts for both the incoming and outgoing neighbors of each node, such that a node’s representation is based on the messages it receives as well as those it sends.

XENet is the attempt to engineer a new GNN layer that makes further use of the edge tensors, including updating their features as the result of the convolution.

XENet's goal was to find the set of rotamers that minimizes the proteincomputed energy, measured in Rosetta Energy Units (REU). Rosetta does this using simulated annealing in a process.

SCALEX implements a batch-free encoder and a batch-specific decoder in an asymmetric VAE framework. SCALEX renders the encoder to function as a data projector that projects single cells of different batches into a generalized, batch-invariant cell-embedding space. 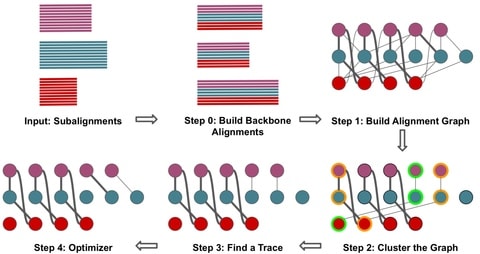 MAGUS uses the GCM (Graph Clustering Merger) technique to combine an arbitrary number of subalignments, which allows MAGUS to align large numbers of sequences with highly competitive accuracy and speed.

Recursive MAGUS allowing it to scale from 50,000 to a full million sequences. Instead of automatically aligning our subsets with MAFFT, subsets larger than a threshold are recursively aligned with MAGUS. 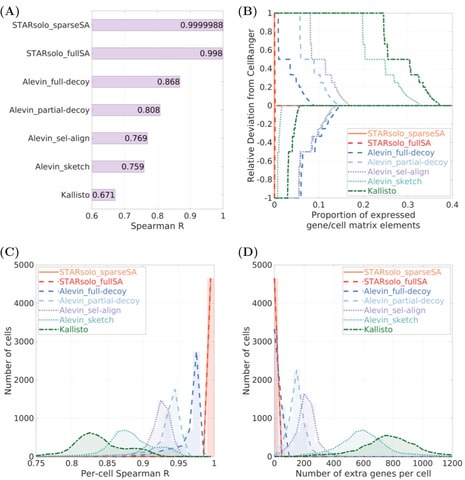 STARsolo is built directly into the RNA-seq aligner STAR, and can be run similarly to standard STAR bulk RNA-seq alignment, specifying additionally the single-cell parameters such as barcode geometry and passlist. 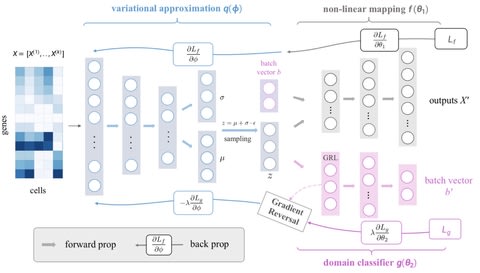 The Gradient Reversal Layer enables the adversarial mechanism, which takes the gradient from the subsequence and changes its sign before passing it to the preceding layer. The latent variables in the lower dimensional space can be used for trajectory inference across modalities. 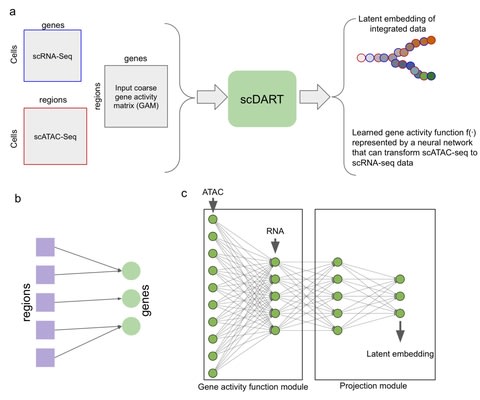 scDART learns a nonlinear function represented by a neural network encoding the cross-modality relationship simultaneously when learning the latent space representations of the integrated dataset.

scDART’s gene activity function module is a fully-connected NN. It encodes the nonlinear regulatory relationship b/n regions / genes. the projection module takes in the scRNA-seq count matrix and the pseudo- scRNA-seq matrix, and generates the latent embedding of both modalities.

□ stPlus: a reference-based method for the accurate enhancement of spatial transcriptomics

stPlus first augments spatial transcriptomic data and combines it with reference scRNA-seq data. The data is then jointly embedded using an auto-encoder. Finally, stPlus predicts the expression of spatially unmeasured genes based on weighted k-NN. 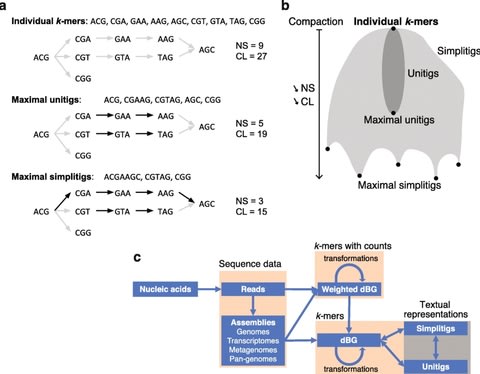 □ Simplitigs as an efficient and scalable representation of de Bruijn graphs

Simplitigs correspond to vertex-disjoint paths covering the graph but relax the unitigs’ restriction of stopping at branching nodes.

an algorithm for rapid simplitig computation from a k-mer set and implement it in a tool called ProphAsm, which proceeds by loading a k-mer set into memory and a greedy enumeration of maximal vertex-disjoint paths in the associated de Bruijn graph.

TReNCo utilizes TAD boundaries as a hard cutoff, instead of distance based, to efficiently create context-specific TF-gene regulatory networks, and utilize dynamic programming to factor matrices within TADs and combine network into a full adjacency matrix for a regulatory graph. 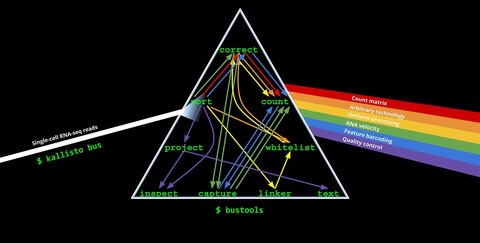 a single experiment can look at 100,000 cells and measure information from hundreds of thousands of transcripts (fragments of RNA produced when a gene is active), resulting in tens of billions of sequenced fragments.

The workflow is based on the kallisto and bustools programs, and is near optimal in speed with a constant memory requirement providing scalability for arbitrarily large datasets.

an inflation of gene-gene correlations that affects the predicted network structures and may decrease the performance of network reconstruction in general.Evaluating the combination between imputation and network inference on different datasets results in a cubic matrix. 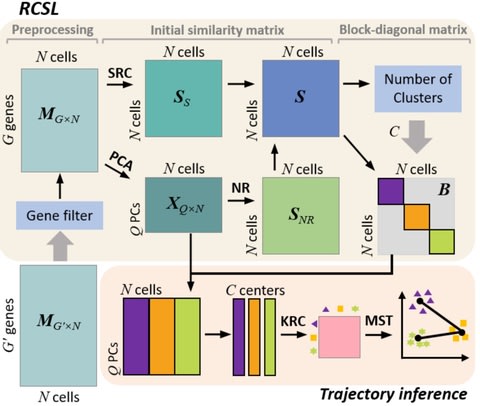 RCSL uses Spearman’s rank correlations of a cell’s expression vector with those of other cells to measure its global similarity, and adaptively learns neighbour representation of a cell as its local similarity.

UCell scores, based on the Mann-Whitney U statistic, are robust to dataset size and heterogeneity, and their calculation demands relatively less computing time and memory than other available methods, enabling the processing of large datasets (10^5 cells).

UCell scores depend only on the relative gene expression in individual cells and are therefore not affected by dataset composition. UCell can be applied to any cell vs. gene data matrix, and includes functions to directly interact with Seurat objects.

AFLAP generates ultra-dense genetic maps based on single-copy k-mers without reference to a genome assembly. This approach to linkage analysis does not require reads to be mapped and variants called against a reference assembly for marker identification.

DNA Fountain, a strategy for DNA storage devices that approaches the Shannon capacity while providing strong robustness against data corruption. The strategy harnesses fountain codes which allows reliable unicasting of information over channels that are subject to dropouts.

the decoding process focusing on the cooperation of key components: Hamming-distance based clustering, discarding of abnormal sequence reads, Reed-Solomon (RS) error correction as well as detection, and quality score-based ordering of sequences. 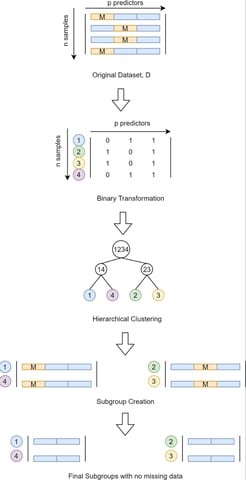 DMU approach divides the dataset with missing values into smaller subsets of complete data followed by preparing and updating the Bayesian model from each of the smaller subsets. 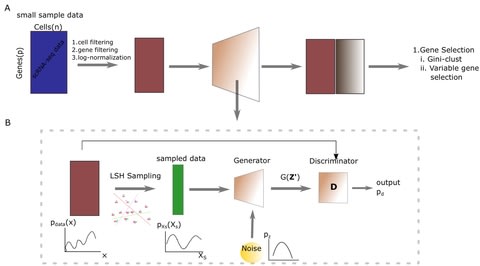 a subsample of original data based on locality sensitive hashing (LSH) technique and augment this with noise distribution, which is given as input to the generator.

LSH-GAN can able to generate realistic samples in a faster way than the traditional GAN. This makes LSH-GAN more feasible to use in the feature (gene) selection problem of scRNA-seq data. 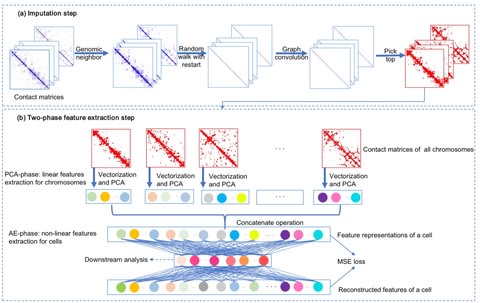 The q-mer analysis summarizes the RNA-Seq data using the "q-mer vector": the ratio of 4q kinds of q-length oligomer in the alignment data. by increasing the q value, q-mer analysis can produce the vector with a higher dimension than the one from the count-based method.

This "dimensionality increment" is the key point to describe the sample conditions more accurately than the count-based method does.


□ MDEC: Toward Multidiversified Ensemble Clustering of High-Dimensional Data: From Subspaces to Metrics and Beyond

a large number of diversified metrics by randomizing a scaled exponential similarity kernel, which are then coupled with random subspaces to form a large set of metric-subspace pairs.

Based on the similarity matrices derived from these metric-subspace pairs, an ensemble of diversified base clusterings can thereby be constructed.

an entropy-based criterion is utilized to explore the cluster-wise diversity in ensembles, Finally, based on diversified metrics, random subspaces, and weighted clusters, 3 specific ensemble clustering algorithms are presented by incorporating three types of consensus functions. 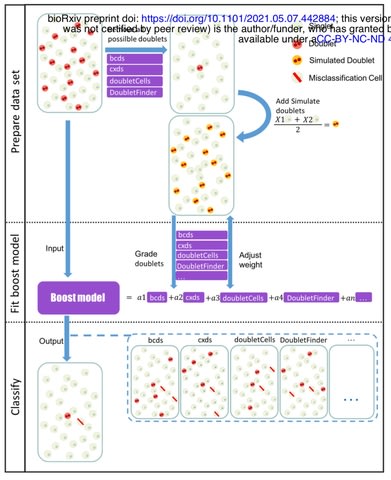 Chord added a step, ‘overkill’, which first used different methods to evaluate the data, filtered out cells identified by any method, then simulated doublets by the remaining cells.

TieBrush can also be used as a method for aggregating data for downstream computational analysis, and is compatible with most software tools that take aligned reads as input.

cellsnp-lite was initially designed to pileup the expressed alleles in single-cell or bulk RNA-seq data, which can be directly used for donor deconvolution in multiplexed scRNA-seq data, which assigns cells to donors and detects doublets, even without genotyping reference.

cellsnp-lite does not aim to address the technical issues caused by sequencing platforms, e.g., uneven amplification in scDNA-seq and low coverage in scRNA-seq, but rather leaves them to downstream statistical modelling.

AMBARTI allows the possibility of reasoning other than the ones obtained by models which consider the genotypic and environmental effects as linear and the interaction GxE in the maximum as bilinear. 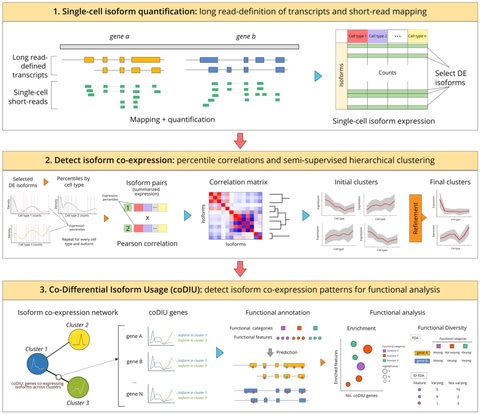 BSBolt was the fastest alignment tool across all simulation conditions, aligning close to 2.29 million reads per minute on average.

Prowler out-performs Nanofilt as a QC program for ONT reads. The specific settings that are applied need to be considered when selecting trimming settings for Prowler due to the tradeoff between continuality and error rate of assemblies. 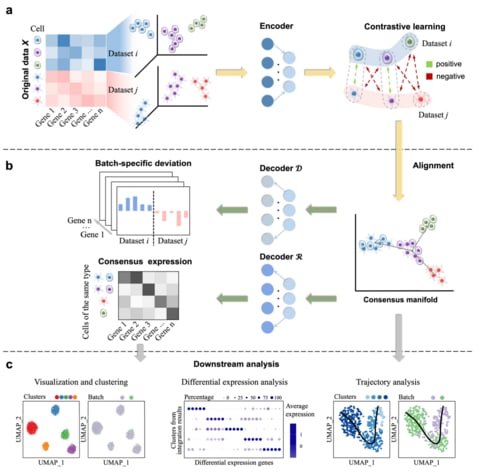 MAT2 that aligns cells in the manifold space with a deep neural network employing contrastive learning strategy. with cell triplets defined based on known cell type annotations, the consensus manifold yielded by the alignment procedure is more robust.

by reconstructing both consensus and batch-specific matrices from the latent manifold space, MAT2 can be used to recover the batch- effect-free gene expression that can be used for downstream analysis.

Finally, a CTC decoder generates a polished sequence with a greedy algorithm. NeuralPolish solves a large number of deletion errors at the cost of introducing some insertion errors, thereby reducing the overall error rate of the draft assembly.