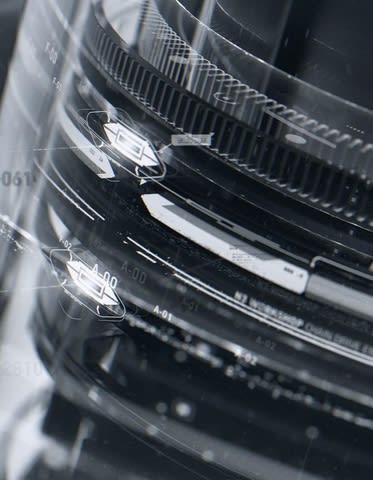 □ We simply cannot go on being so vague about ‘function’:

Philosophers have also pointed out that ecologists, physiologists, and molecular biologists and genomicists tend to be satisfied with ‘what it does’ or causal role explanations, whereas evolutionary biologists also require ‘why it’s there’ or selected effect rationales. it is clearly wrong to use conclusions based on one to ‘refute’ hypotheses based on the other. 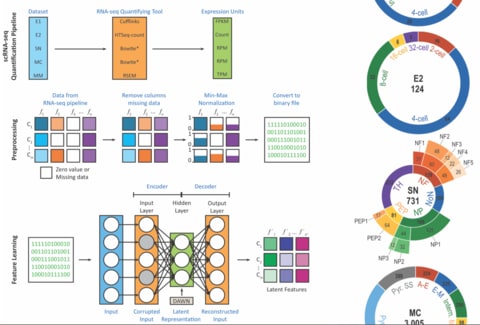 a novel extension to the DAE called Denoising Autoencoder With Neuronal approximator (DAWN), which decides the number of latent features that is required to represent efficiently any given dataset. using the features generated by DAWN as an input to the EM clustering algorithm and show that the hybrid deep clustering approach, DUSC (Deep Unsupervised Single-cell Clustering), has higher accuracy.

demonstrate the feasibility of integrating the 3GS with 10×-Genomics technologies for a new strategy of hybrid de novo genome assembly by utilizing DBG2OLC and Sparc software packages.

A Markov process describes the random walk of a traveling probe in the corresponding energy landscape, mimicking the motion of a biomolecule involved in chromatin function. By studying the metastability of the associated Markov State Model upon annealing, the hierarchical structure of individual chromosomes is observed, and a corresponding set of structural partitions is identified at each level of hierarchy.

OGRE employs Minimap2, a heuristic approach for the efficient construction of an overlap graph. but the single linkage algorithm is sequential and has a complexity of O(n log n+n), applying it to the long edge list obtained results in unacceptable computation times. About half of these overlaps could be filtered out using a logistic regression on the overlap length and a Phred-based matching probability. 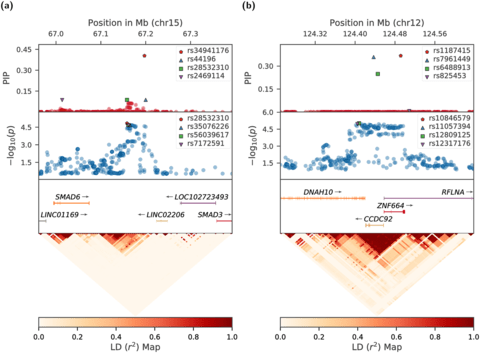 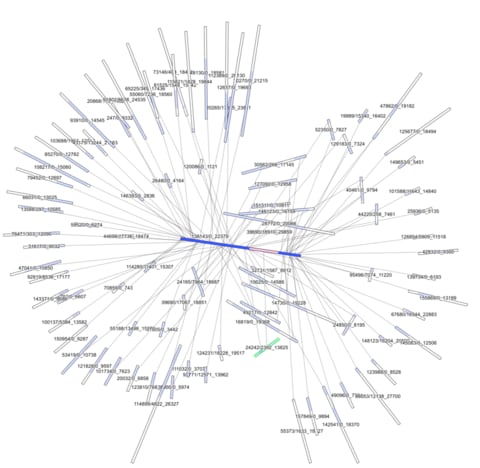 the Graphical Fragment Assembly 2 (GFA2) format introduces several features, which makes it suitable for representing other kinds of information, such as scaffolding graphs, variation graphs, alignment graphs, and colored metagenomic graphs. The visualizations can be exported to raster and vector graphics formats.

The assembly graph of the scaffold sequences is output as GFA 2 by the Abyss assembler when using the option graph=gfa2. This graph contains dovetail overlaps between pairs of scaffolds, but has no lines describing the gaps. Thus, to obtain a complete scaffolding graph, the abyss-to-dot tool with the options--gfa2 --estimate was applied to the DOT file containing distance estimates output by abyss-scaffold.

LR_Gapcloser is flexible in that both Pacbio reads and Nanopore reads can be utilized to fill the gaps, and also likely to use the 10X genomic linked reads and pre-assembled contigs to fill gaps in the assemblies. 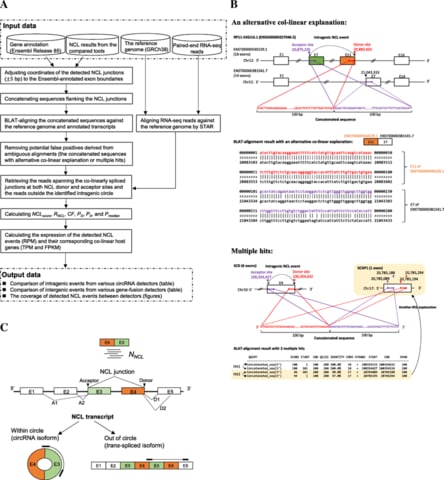 NCLcomparator first examine whether the input Non-co-linear (NCL) events are potentially false positives derived from ambiguous alignments (i.e., the NCL events have an alternative co-linear explanation or multiple matches against the reference genome). 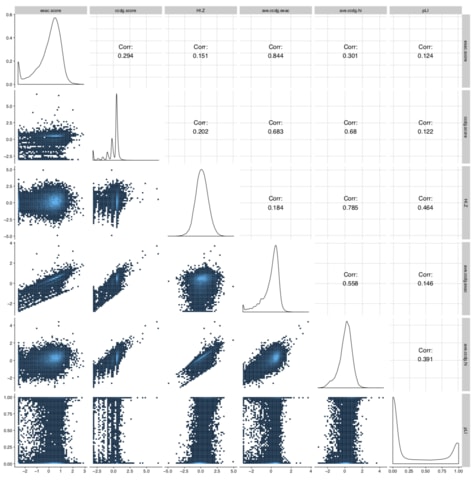 utilize a heuristic method to develop a new scaffolder called Multi-CSAR that is able to accurately scaffold a target draft genome based on multiple reference genomes, each of which does not need to be complete. the experimental results on real datasets show that Multi-CSAR outperforms other multiple reference-based scaffolding tools, Ragout and MeDuSa, in terms of many average metrics. 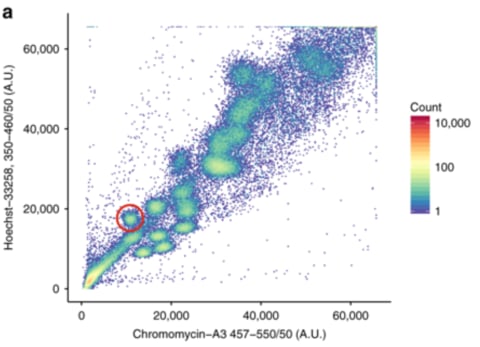 a novel strategy to sequence native, unamplified flow sorted DNA on a MinION nanopore sequencing device. It constitutes a significant improvement over comparable previous methods, increasing continuity by more than 800%.

the definition of n-beat meters in Sanskrit was one of the earliest examples of recursion. The Fibonacci numbers originated in Indian poetry, many centuries before Fibonacci.

The book is organized in 3 parts of increasing difficulty: From counterfactuals and causal diagrams to treatment-confounder feedback and g-methods. 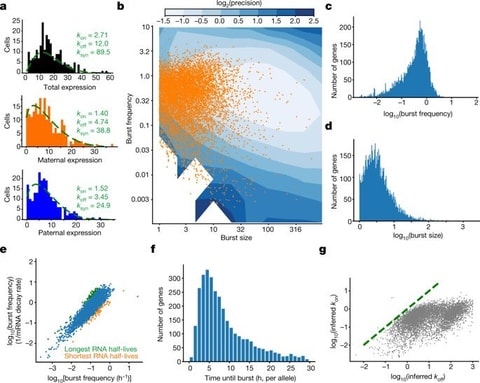 the core promoter elements affect burst size and uncover synergistic effects between TATA and initiator elements, which were masked at mean expression levels. burst frequency is primarily encoded in enhancers and burst size in core promoters, and that allelic single-cell RNA sequencing is a powerful model for investigating transcriptional kinetics.

a genome-wide framework for enhancer-gene pairings via multiplex CRISPRi + scRNA-seq. "the assay formerly known as crisprQTL", attempt at-scale validation and pairing of candidate regulatory elements with their target genes. 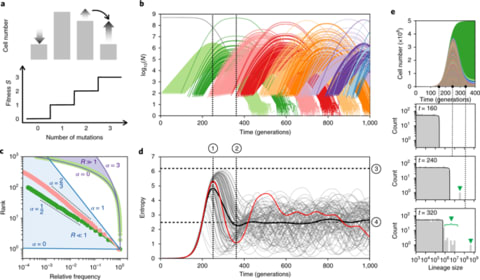 □ The dynamics of adaptive genetic diversity during the early stages of clonal evolution:

a crash in adaptive diversity follows, caused by highly fit double-mutant ‘jackpot’ clones that are fed from exponentially growing single mutants, a process closely related to the classic Luria–Delbrück experiment. The diversity crash is likely to be a general feature of asexual evolution with clonal interference; however, both its timing and magnitude are stochastic and depend on the population size, the distribution of beneficial fitness effects and patterns of epistasis.

the Genome Query Language (GQL) and its distributed implementation GenAp which use a SQL-like syntax for fast retrieval of information of unprocessed sequencing data. Similarly, the Genometric Query Language (GMQL) implements a DSL for combining genomic datasets. 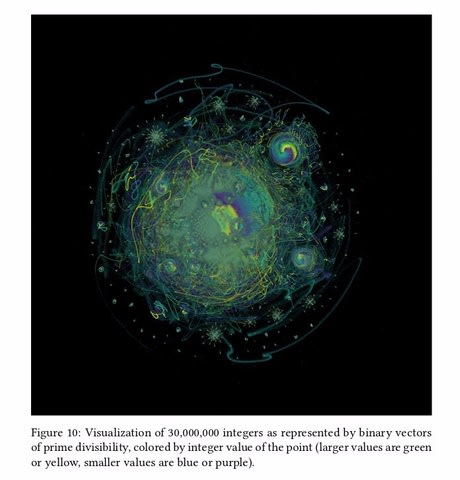 □ An updated and significantly expanded version of the "UMAP: Uniform Manifold Approximation and Projection for Dimension Reduction":

□scSVA: an interactive tool for big data visualization and exploration in single-cell omics:

scSVA is memory efficient for more than hundreds of millions of cells, can be run locally or in a cloud, and generates high-quality figures. scSVA is a numerically efficient method for single-cell data embedding in 3D which combines an optimized implementation of diffusion maps with a 3D force-directed layout, enabling generation of 3D data visualizations at the scale of a million cells.

Meta-LEARNA constructs an RNA Design policy that can be applied out of the box to solve novel RNA target structures by meta-learning across 8000 different structures for one hour on 20 cores.

demonstrate how to perform backpropagation analytically through a physical simulator defined via a linear complementarity problem. Through experiments in diverse domains, highlight the system’s ability to learn physical parameters from data, efficiently match and simulate observed visual behavior, and readily enable control via gradient-based planning methods.

a deep learning wrapper around a differentiable physics engine and then can rapidly learn to fix the errors of the physics engine. treat a deep neural network output as an energy function/probability space (with appropriate marginalisation).

The global genomics market, according to Grand View Research, it’s forecast to be worth $27.6 billion, led by pioneers such as Verge Genomics, Sophia Genetics, and Shivom. 10X Genomics develops a suite of gene analysis tools, today announced it has secured $35 million in financing in an extension of its April Series D. The round, led by Meritech Capital, with participation from Wells Fargo and Fidelity, brings 10X’s total raised to $243 million.

□ The DNA Walk and its Demonstration of Deterministic Chaos:

□ Central dogma rates and the trade-off between precision and economy in gene expression:

explain the empty Crick space by a trade-off between cost and noise of gene expression. This theory accurately predicts the boundary of the empty region which varies by 2 orders of magnitude between the model organisms they considered.

ELECTOR is an efficient segmentation heuristic for multiple alignment. this tool processes the different fragments separately before reconstituting the whole alignment, and takes into account missing parts. 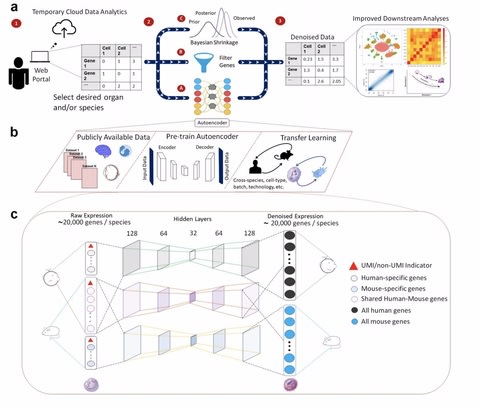 SAVER-X uses the deep autoencoder, a neural network that achieves noise reduction by means of an information bottleneck. The deep learning model in SAVER-X extracts transferable gene expression features across data from different labs, generated by varying technologies, and obtained from divergent species.

A mathematically equivalent algorithm, pNeRF, has been derived that is parallelizable along a polymer's length. In machine learning-based workflows, in which partial derivatives are backpropagated through NeRF equations and neural network primitives, switching to pNeRF can reduce the fractional computational cost of coordinate conversion from over two-thirds to around 10%.

exemplify the use of CellSIUS for the characterization of a human pluripotent cell 3D spheroid differentiation protocol recapitulating deep-layer corticogenesis in vitro.

the harmonic mean p-value (HMP), a simple to use and widely applicable alternative to Bonferroni correction motivated by Bayesian model averaging. The power of the HMP to detect significant hypothesis groups is greater than the power of the Benjamini–Hochberg procedure to detect significant hypotheses, although the latter only controls the weaker false discovery rate (FDR).