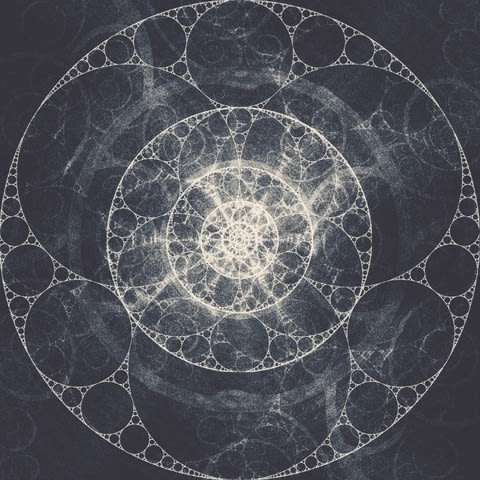 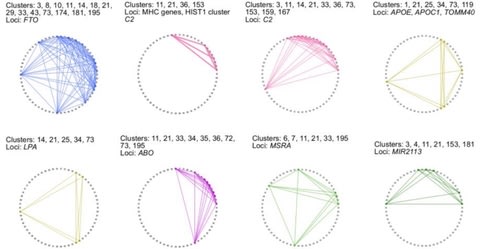 Pleiotropy of trait-associated variants in the human genome has also attracted lots of attention in the field; and Mendelian randomization based approaches have been proposed to detect pleiotropy in GWAS data. 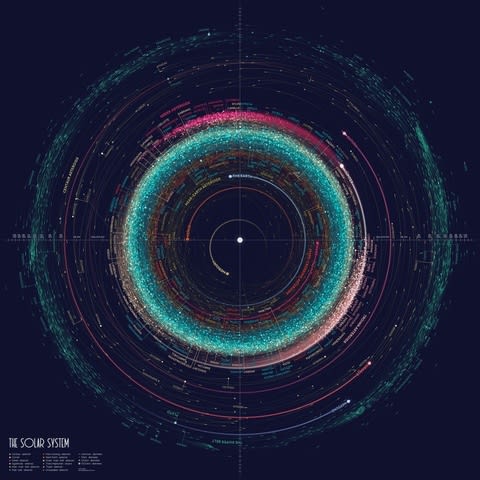 Eleanor Lutz is a biologist with a knack for producing visually rich data visualizations. She's done everything from animated viruses to infographics on plant species that have evolved to withstand forest fires. 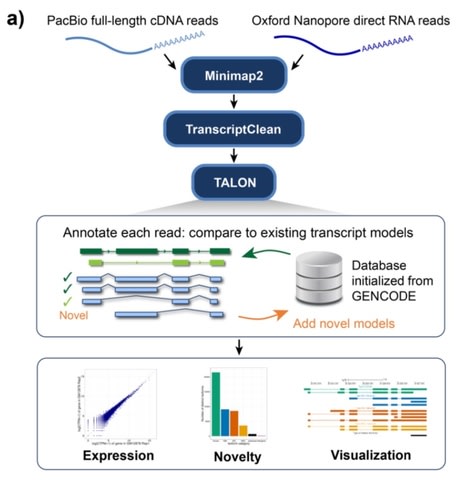 TALON is the ENCODE4 pipeline for analyzing PacBio cDNA and ONT direct-RNA transcriptomes.

TALON pipeline for technology-agnostic, long-read transcriptome discovery and quantification tracks both known and novel transcript models as well as expression levels across datasets for both simple studies and larger projects such that seek to decode transcriptional regulation.

scEntropy can be considered as a one-dimensional stochastic neighbour embedding of the original data.

the use of single-cell entropy (scEntropy) to measure the order of the cellular transcriptome profile from single-cell RNA-seq data, which leads to a method of unsupervised cell type classification through scEntropy followed by the Gaussian mixture model (scEGMM).

the idea of finding the entropy of a system with reference to a baseline can easily be generalized to other applications, which extends the classical concepts of entropy in describing complex systems.

DEUS is a novel profiling strategy that circumvents the need for read mapping to a reference genome by utilizing the actual read sequences to determine expression intensities.

DEUS strategy enables a more comprehensive and concise representation of small RNA populations without any data loss or data distortion.

ivis is a novel framework for dimensionality reduction of single-cell expression data.

ivis utilizes a siamese neural network architecture that is trained using a novel triplet loss function. Each triplet is sampled from one of the k nearest neighbours as approximated by the Annoy library, neighbouring points being pulled together & non-neighours being pushed away.

ivis learns a parametric mapping from the high-dimensional space to low-dimensional embedding, facilitating seamless addition of new data points to the mapping function. 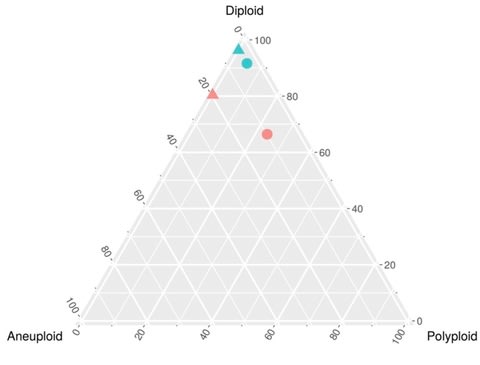 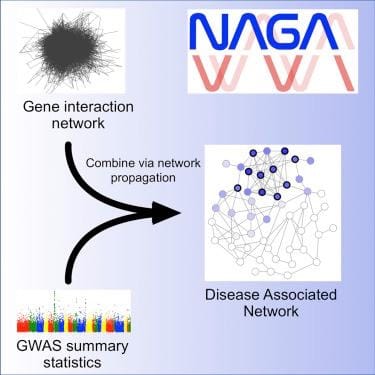 NAGA (Network Assisted Genomic Association)—taps the NDEx biological network resource to gain access to thousands of protein networks and select those most relevant and performative for a specific association study.

NAGA is based on the method of network propagation, which has emerged as a robust and widely used network analysis technique in many bioinformatics applications.

PEGASUS finds an analytical model for the expected chi-square statistics because of correlation from linkage disequilibrium, which worked well with the network propagation algorithm. 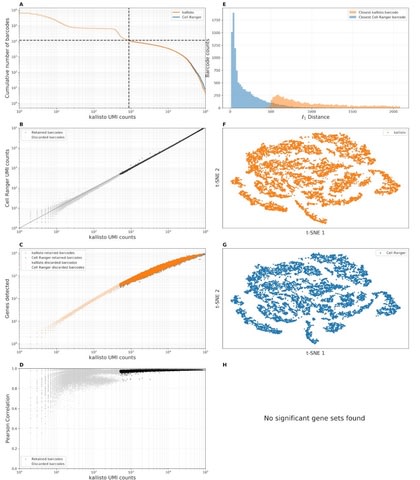 this workflow is based on the kallisto and bustools programs, and is near-optimal in speed and memory.

SMNN either takes cluster/cell-type label information as input or infers cell types using scRNA-seq clustering in the absence of such information. 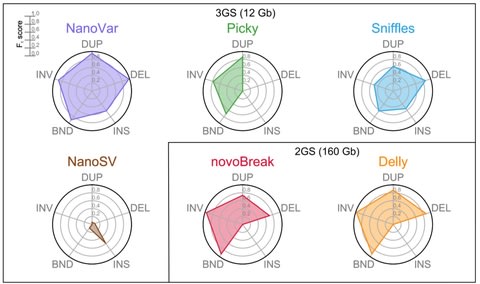 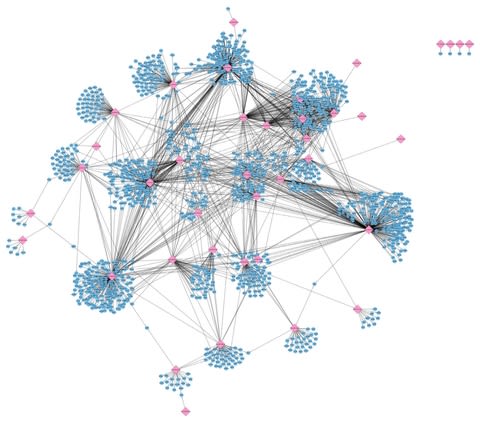 In the principal component analysis for very large collections of expression data, the use of Multimodal Mutual Information (MMI) enables more biologically meaningful spaces to be extracted than the use of Pearson correlation.

Multimodal Direct Information, which is enhanced from MMI based on maximum entropy principle.

a parameter estimation scheme for biological data with a new perspective of symmetries and recurrence relations, and point out many fallacies in the previous estimation procedures.

Parameter estimation provides us with better knowledge about the specific characteristics of the model that retains temporal information in its structure.

Since the inference techniques are closely coupled with the arrival process, assuming that networks evolve according to the duplication-divergence stochastic graph model.

a probabilistic solution to these issues by developing a Bayesian inference approach, with Markov chain Monte Carlo sampling, to accurately estimate power law exponents, the number of mixtures, and their weights, for both discrete and continuous data.

MetaSeek scrapes metadata from the sequencing data repositories, cleaning and filling in missing or erroneous metadata, and stores the cleaned and structured metadata in the MetaSeek database.

While the original chaos game representation (CGR) has been used mainly for genome sequence encoding and classification, modifying it to work also for protein sequences, resulting in n-flakes representation, an image with several icosagons.

This approach produces a multidimensional matrix from which both the state occupancy and the transition dynamics can be recovered. 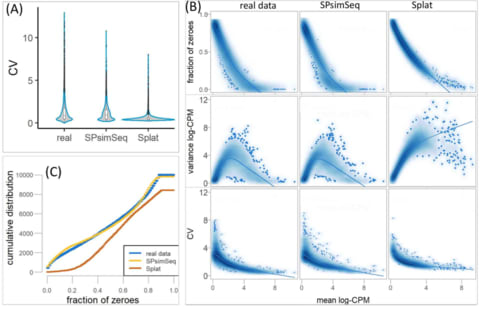 SPsimSeq simulates data from a good estimate of the actual distribution of a given real RNA-seq dataset.

In contrast to existing approaches that assume a particular data distribution, SPsimSeq constructs an empirical distribution of gene expression data from a given source RNA-seq experiment to faithfully capture the data characteristics of real data.

SPsimSeq can be used to simulate a wide range of scenarios, such as single or multiple biological groups, systematic variations (e.g. confounding batch effects), and different sample sizes.

an automatic and extensive benchmark tool that not only reports classical error correction metrics but also the effect of correction on gene families, isoform diversity, bias toward the major isoform and splice site detection.

long read error correction tools that were originally developed for DNA are also suitable for the correction of Nanopore RNA-sequencing data, especially in terms of increasing base pair accuracy.

LR_EC_analyser can be applied to evaluate the extent to which existing long-read DNA error correction methods are capable of correcting long reads.

a general theorem providing necessary and sufficient explicit conditions for a morphism of sites to induce an equivalence of toposes.

This results from a detailed analysis of arrows in Grothendieck toposes and denseness conditions, which yields results of independent interest.

And also derive site characterizations of the property of a geometric morphism to be an inclusion (resp. a surjection, hyper-connected, localic), as well as site-level descriptions of the surjection- inclusion and hyperconnected-localic factorizations.

PaKman presents a solution for the two most time-consuming phases in the full genome assembly pipeline, namely, k-mer counting and contig generation.

PaKman is able to generate a high-quality set of assembled contigs for complex genomes such as the human and wheat genomes in a matter of minutes on 8K cores.

A key aspect of this algorithm is its graph data structure, which comprises fat nodes (or what we call “macro-nodes”) that reduce the communication burden during contig generation.

GLSNN is a nonlinear data-driven process monitoring technique through preserving both global and local structures of normal process data.

GLSNN is characterized by adaptively training a neural network which takes both the global variance information and the local geometrical structure into consideration. 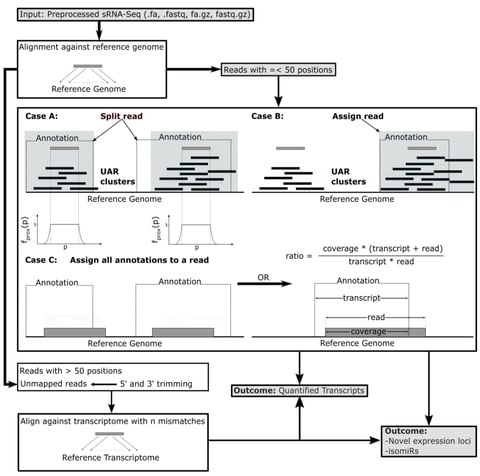 In contrast to Apriori, FP-Growth is a frequent pattern generation algorithm that inserts items into a pattern search tree, which allows it to have a linear increase in runtime with respect to the number of unique items or entries.

FP-Max is a variant of FP-Growth, which focuses on obtaining maximal itemsets. An itemset X is said to maximal if X is frequent and there exists no frequent super-pattern containing X.

Multi-Modal Cell Profiling and Data Integration to Atlas the Immune System is the collaborative project will take advantage of the strengths of each of the core technologies: multimodal RNA data from CITE-seq, developed in the NYGC Technology Innovation Lab.


□ An explicit formula for a dispersal kernel in a patchy landscape

derive a generalization of the classic Laplace kernel, which includes different dispersal rates in each patch as well as different degrees of bias at the patch boundaries.

an explicit formula for the kernel as piecewise exponential function with coefficients and rates determined by the inverse of a matrix of model parameters.

Albacore, Guppy and Scrappie all use an architecture that ONT calls RGRGR – named after its alternating reverse-GRU and GRU layers.

Chiron is a third-party basecaller still under development that uses a deeper neural network than ONT’s basecallers. Chiron v0.3 had the highest consensus accuracy (Q25.9) of all tested basecallers using their default models. 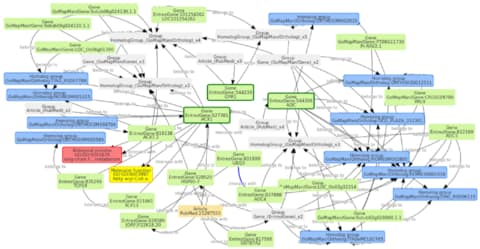 It is built on top of Biomine, a system which integrates cross-references from several biological databases into a large heterogeneous probabilistic network.

a major update of PhenoScanner, incl over 150 million genetic variants and more than 65 billion associations with diseases and traits, gene expression, metabolite and protein levels, and epigenetic markers.

The query options have been extended to include searches by genes, genomic regions and phenotypes, as well as for genetic variants. All variants are positionally annotated using the Variant Effect Predictor and the phenotypes are mapped to Experimental Factor Ontology terms.

Linkage disequilibrium statistics from the 1000 Genomes project can be used to search for phenotype associations with proxy variants.

When novel MDAs are predicted, the nearest neighbour information for miRNAs and diseases is fully considered.

incorporating the Gaussian interaction profile kernels of miRNAs and diseases also contributed to the improvement of prediction performance. 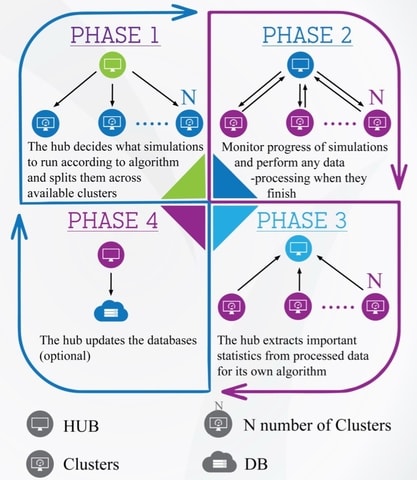 PyGDS provides a framework with which to implement phenotype optimisation algorithms on computational models across computer clusters.

The framework is abstract allowing it to be adapted to utilise different computer clusters, optimisation algorithms, or design goals.

It implements an abstract multi-generation algorithm structure allowing algorithms to avoid maximum simulation times on clusters and enabling iterative learning in the algorithm.

The hypothesis is that such modules could be discovered in the deep representations within the auto-encoder when trained to capture the variance in the input-output map of the transcriptional profiles.

Using a three-layer deep auto-encoder we find a statistically significant enrichment of GWAS relevant genes in the third layer, and to a successively lesser degree in the second and first layers respectively.

Ultraplexing-based assemblies are highly accurate in terms of genome structure and consensus accuracy and exhibit quality characteristics comparable to assemblies based on molecular barcoding. 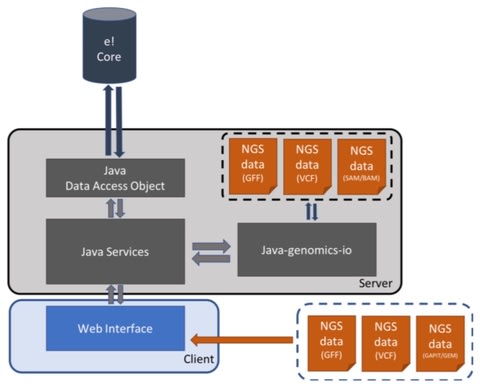 the TGAC Browser, a genome browser that relies on non-proprietary software but only readily available Ensembl Core database and NGS data formats.

a PerformIng Classification and Knowledge Extraction via Rules using random forests on Human Genes (PICKER-HG), dynamically constructs a classification dataset, given a list of human genes with annotations entered by the user, and outputs classification rules extracted of a Random Forest model.